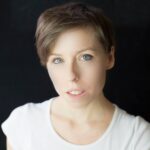 Once Andrea turned 10, she became mesmerized by drums-their infinite sound variations, their look, even the smells of the store where her mother rented Andrea’s first kit (back when drum rentals were still a thing). Taking the pragmatist’s approach, she went the academic route and worked her way through high school drumline and jazz band into an undergraduate degree in jazz studies at the The University of North Texas. While studying drumset with Ed Soph, Andrea began working as a cruise ship showband drummer for Celebrity Cruises, Royal Caribbean International and Holland America Cruises.

Post-college, Andrea has had the privilege of playing with Kenny Aronoff at the House of Blues Dallas, opening for the EDM band Cause and Effect, and playing in the house band for Joan Rivers. While in Dallas, she regularly performs with local talents Anton Shaw, The Bad Habits, Ciao Bella, Rhymes for Ridley, Troy Cartwright, and several jazz combos.