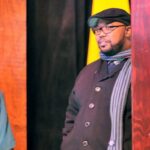 Myles Tate, III is a pianist hailing from the windy city herself; Chicago, IL. With roots in Gospel, Blues, and Soul music, his approach to the craft is simple: Play from the soul and touch all the souls who are listening.  Having studied jazz piano at Roosevelt University (Chicago) and Michigan State University (East Lansing, MI) he has been carrying out his plan to affect as many listeners as possible.  Myles began his musical journey at 6 years old picking up drumsticks and beginning to play drums at his church. At the age of 12 he moved on  to piano and Hammond B-3 organ which was fueled by his desire to play jazz and his desire began to become satisfied when he joined his Jr. high school band. It was as this point that Myles would find himself playing more piano than any of the other instruments he was learning to play.  He began to win awards for improvisation  throughout Jr. high and his high school career. In 1996 he took first chair piano for jazz at the Illinois Music Educators Association Conference, South Inter-Conference Association Conference, and he took third chair for the Music Educator’s National Conference while winning second place for improvisation at the MENC. He repeated his performance in his senior year in high school except he took first chair piano for jazz at the MENC and got second place for original composition. Moving on to college Myles had the pleasure of studying with Eddie Baker (Roosevelt) and Rick Roe(MSU) and has had the opportunity to play with greats such as: Rodney Whitaker,Wycliffe Gordon, Orbert Davis, Wynton Marsalis, Nicole Mitchell, Corey Wilkes, Dorinda Clark-Cole, Lemmie Battles, Tiaybe, Baritone, Harvey Mason, Monifah, Al Haig, Slum Village, Dwele, Big Daddy Kane and others who have tremendously affected the music industry. And now Myles has stepped out and formed his own group named Myles Tate and The Alliance. Myles has since relocated to Dallas as of 2012 and has been touching his new listeners just as he touched his Chicago listeners. Enjoy the experience of Myles Tate. Myles is also an educator in music committed to sharing the information he has been taught with any student or colleague who is willing to listen.His teaching career has spanned over 15 years having taught from pre-k all the way through college level music. Myles currently teaches band for Music Learning Band of Forney, TX and elementary music for Holy Trinity Catholic School in Dallas Tx. Musicianship is very important in this craft and Myles stresses that in his teaching. His educational philosophy is: ‘It’s not enough to know how to do something; but why you are doing it and being able to explain how you do it.’ ‘Education mixed with raw talent creates excellence in the craft.’-