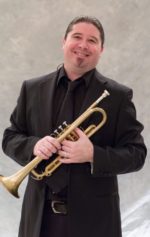 Chris began playing trumpet at the age of 13. He learned his basic trumpet skills from his father. Although receiving a late start on his trumpet playing, Chris caught up quickly and was soon working professionally around Ardmore. After graduating high school, Chris joined the Army Bands working not only as a trumpet player, but also as a vocalist, keyboardist, and sound technician with the 62nd Army Band based in Ft. Bliss, El Paso. His masterful skills provided him with opportunities to travel, play and teach in South Korea, the Czech Republic, Mexico, Canada, and South America. Chris earned his Master’s Degree in Jazz Performance from the University of Texas at Arlington.  He now holds a position as Adjunct Professor at Tarrant County Community College and Northlake College.