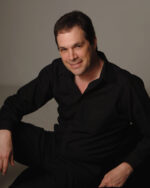 Grammy-nominated composer Richard DeRosa is currently the Director of Jazz Composition and Arranging at the University of North Texas and the Artistic Director for American Jazz Venues (AJV). Since 2012 he has conducted and arranged for the prestigious WDR Big Band in Cologne, Germany, and served as the band’s chief conductor from 2014-2016. Since 2001 he was arranged and conducted projects for Wynton Marsalis and Jazz at Lincoln Center.

Throughout his career, his compositions and arrangements have encompassed a vast variety of writing styles which have been heard on stages and in venues around the world, on television and in film, on and off Broadway, in videos, audio books and numerous CD recordings. “Neil”, his original work for big band garnered a 2015 Grammy nomination for “Best Instrumental Composition” and is featured on Lab 2015 recorded by the UNT One O’Clock Lab Band. In addition to his commissioned work writing and conducting and his teaching at University of North Texas, DeRosa is a published author and remains active as an adjudicator, clinician, and guest lecturer.