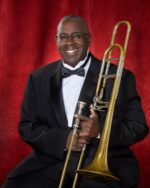 Tony Baker has taught at the University of North Texas College of Music since 2000. Currently a member of the Dallas Opera Orchestra, he has performed with ensembles such as the Minnesota Opera Orchestra, the Dallas Symphony Orchestra, the Dallas Jazz Orchestra, the Columbus Symphony Orchestra and the Akron Symphony Orchestra. As a jazz musician Mr. Baker has performed with groups such as the Woody Herman Band, the Duke Ellington Orchestra and the Jimmy Dorsey Orchestra. He has also performed on stage with artists such as Wynton Marsalis, Steve Turre, Terry Gibbs, John Fedchock, Pete Christlieb and Peter Erskine. Mr. Baker is or has been on the faculty of summer jazz workshops at institutions such as the University of North Texas and Northwest College in Cody, Wyoming. Mr. Baker is a regular faculty member of the University of North Texas Combo Workshop. He was also a guest artist at the 2014 Texoma Jazz Festival, the 2002 Redbud Jazz Festival, and the 1999 Capital University Jazz Week. Internationally, Mr. Baker has served as a guest artist and clinician at events such as the 2013 Summer Course of Brazilia (CIVEBRA) and the 2006 Trombones de Costa Rica International Festival. Mr. Baker served as the All-­‐‑State Conductor of the 2016 Arkansas All-­‐‑State Jazz Ensemble I and the 2004-­‐‑2005 Minnesota All-­‐‑State Jazz Ensemble. He is a frequent clinician and adjudicator and maintains a very active performing schedule.