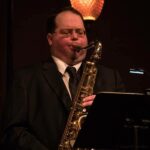 A Fort Worth native, Irwinsky – who graduated with a degree in jazz studies from UTA – has played with Peter Erskine, Louie Bellson, Joe McBride, and the Jim Wiedner big band. He has also played aboard the SS Oceanbreeze, the SS Rembrandt, and the Seabourn Legend.

From his stellar performances in solo acts to playing in large ensembles,Aaron Irwinsky has been dazzling audiences in the DFW area for over 15 years.
Mr.Irwinsky is a graduate of the UTA jazz studies program. Aaron has performed with jazz legends as, Peter Erskine, Louie Bellson Buddy DeFranco, the Jim Widner Big Band, and Joe McBride.Throughout 1999-2000, Mr.Irwinsky was the featured saxophonist on the cruise ships S.S. Oceanbreeze, the Seabourn Legend(which appeared in the movie Speed 2 Cruise Control), and the S.S. Rembrandt.
Irwinsky has lent his talents to many staples in the DFW jazz scene as well. You can currently hear him on Sergio Paimes album “What Brought You Here” and Dave Zoller’s new album “Evidence: The Music of Thelonious Monk”.
Aaron has performed at many jazz festivals including the Montreux Jazz fest in 1995, the North Sea Jazz fest in 1999, the Katy Jazz fest in 2017, and the Denton Arts and Jazz fest in 2017.Most recently, Aaron performed with the Dallas Symphony Orchestra presenting” The Cotton Club” conducted by Jeff Tyzik. Finally, Aaron has maintained a balance of performing and teaching throughout his care

Ben Bohorquez is a local musician in the DFW area. Born in El Paso, TX, his family moved around from Indianapolis, IN to La Paz, Bolivia before settling down in Houston, TX. His mother taught him piano at the early age of 5, but Ben started taking music seriously when he chose to play the saxophone in 6th grade. Through the band programs, private instruction with local legend Martin Langford, and his father’s church where he became a worship leader at age 12, Ben excelled in music and was exposed to many different styles. Mr. Langford introduced him to great saxophone players who improvised in the different idioms of jazz. This became a goal at an early age. After graduating from the prestigious High School for the Performing and Visual Arts (HSPVA), Ben moved to Denton, TX to pursue a Jazz Studies degree from the University of North Texas. He was in the last generation of UNT students who studied with Jim Riggs, and the first generation to study with Brad Leali. He recorded with the UNT Jazz Singers I and the 2 O’Clock Lab Band. Ben completed his degree in 2009 and now resides in Dallas, TX where he is a freelance musician. He performs regularly with The Funky Knuckles, Tatiana ‘LadyMay’ Mayfield, Catie Waters, and RSVP. He has also performed with Snarky Puppy, Bernard Wright, Foley, Foe Destroyer, and the Dallas Theatre Center.

Ben has been teaching private lessons since 2007. His first student is now pursuing a double major in Music Education and Jazz Studies at UNT. Whether teaching beginner or advanced students, Ben has always tried to tailor the lessons to the personal interests of each student, while inherently ensuring that the necessary fundamentals of the instrument and music are instilled. One of his passions is helping students discover what the meaning of music is in their lives and watching them grow as musicians. 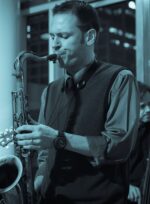 David Lown is a graduate (M.M., B.M.) of the University of North Texas, where he performed for three years with the acclaimed One O’Clock Lab Band and directed the Four O’Clock Lab Band. After graduating from UNT, Lown worked for several years as a saxophonist and educator in New York City, performing with many notable jazz artists and ensembles. As a saxophonist, Lown’s recording credits include albums with jazz legends Jimmy Cobb, Dave Liebman, Kenny Wheeler and many others. Mr. Lown has directed the jazz program at Carroll Senior High School in Southlake, Texas since 2008. Under his direction, Carroll Jazz Ensembles have been named national finalists at the prestigious Essentially Ellington competition five times (2010, 2014, 2018, 2020, 2021), where they have won numerous Outstanding Soloist and Outstanding Section awards. Lown was named Carroll Senior High School’s Teacher of the Year for 2013-2014, and in 2017 was named a Quarterfinalist for the 2018 GRAMMY Music Educator Award. He is a past president of the Texas Jazz Educators Association and is now on the organization’s board of directors. 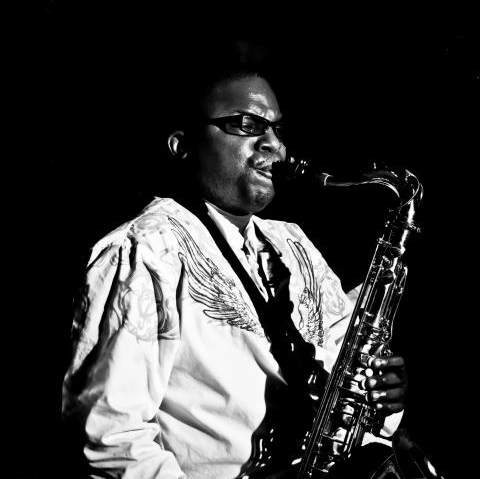 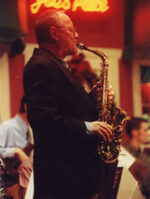 Jim Riggs is a University of North Texas (UNT) Regents Professor Emeritus where for 38 years he taught applied saxophone and directed the award winning UNT Two O’Clock Band.  He is a recording artist and performed regularly with the Dallas and Ft. Worth Symphony Orchestras.  Riggs recorded Prokoviev’s Lt. Kije Suite, Gershwin’s Rhapsody in Blue, Porgy and Bess and American In Paris with the Dallas Symphony Orchestra and performed with the orchestra on a seven country European tour.  Riggs appeared as a jazz soloist with the United States Navy Commodores in Washington, D.C. and has appeared as a featured performer/clinician at Jazz Festivals throughout the USA and Sweden.  Riggs is founder and leader of the Official Texas Jazz Orchestra of Denton.  As a student Riggs performed with the UNT One O’Clock Lab Band and as a freelance artist performed with Frank Sinatra, Ella Fitzgerald, Tony Bennett, Ray Charles, Nancy Wilson, Henry Mancini, Nelson Riddle, Miche Legrand and others. Riggs and pianist Stefan Karlsson recently recorded Texas Times, a CD on the Bolo-Digital label. Riggs holds degrees from the University of North Texas, the University of Toledo and is an artist/clinician for Conn-Selmer Corporation and D’Addario-Rico Reeds.

As an award-winning saxophonist, flutist and vocalist from Dallas, TX, Joyce covers the gamut of musical influence, style and genre from traditional to contemporary jazz and classical to R&B, funk, fusion, blues, pop, and Gospel/Christian.  The mixing and blending of musical styles in her upbringing is definitely her forte and an asset to writing music and entertainment.  Whether it’s upbeat music or sultry smooth jazz or ballads, Joyce provides sensational musical entertainment on saxophone (soprano, alto, and tenor), flute and vocals that caters to the fans or venue.

Her educational background includes a bachelor’s degree in instrumental music education where she also studied saxophone and flute, classical and jazz, theater, and radio and TV broadcasting.  She also participated in the college choir, stage plays, and musicals.  After a brief period with the Acadiana Symphony Orchestra on flute, Joyce moved from Louisiana to Texas where her career shifted to corporate America; however, she returned with sheer determination over seven years ago with her first album, “Sweet Dreams”, and has since released several more projects, including the latest jazz album. “Many Colors”,  “It’s Christmas Time” and other singles releases like “Cherish” and “Sax-O-Phunk”.

She has graced the stage of many music festivals, concert venues, and corporate shows in the United States, but radio stations all over the world are playing her music.  Radio stations have honored her with awards and special recognitions such as the GHP Radio Music Award, Sound Fusion Radio Song of the Week, Ssassy Radio Top 20, etc. along with several special features with radio stations like The Jazz Oasis, Coffee Talk Jazz, Jazzy100 and Amazing Smooth and Jazz Radio.

When Joyce is not performing, she is hard at work on her next project, collaborating with other independent artists or co-hosting on GHP Radio, “The Indie Live Spot”. 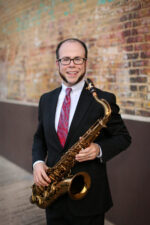 Saxophonist Justin Pierce began his musical career in the musically diverse region of the Texas-Louisiana Gulf Coast. After beginning saxophone studies at age 12, he developed a passion for music in the middle school jazz ensemble. Since that time, he has performed across the United States and internationally, earned degrees in both classical and jazz styles, and taught at the secondary and college levels.

Justin earned a Doctor of Musical Arts degree in Saxophone Performance at the University of North Texas, where he also earned a Master of Music in Jazz Studies. While at UNT, he served as lead alto saxophonist in the One O’Clock and Two O’Clock Lab Bands. As a freelance woodwind performer, Justin has performed with The Glenn Miller Orchestra, Arturo Sandoval, Randy Brecker, Doc Severinsen, The Tommy Dorsey Orchestra, The Temptations, The O’Jays, and Wayne Newton. 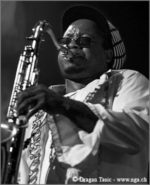 Born in Dallas, Texas, 1970, Mr. Anderson discovered his love for music at the early age of 10. He started playing drums, until he found his true passion for the saxophone. He began studying with James Wilson, who would give him a pinch for each mistake, which he attributes, today, for his dedication and hard work. At this time, Keith Anderson was accepted to Booker T where he was under direct leadership of Bart Marantz. Keith started playing locally with a singer by the name of Pat Peterson, who is one of the singers for John Cougar Mellancamp. Later, Keith would be discovered by the legendary, Les McCann. Following that Mr. Anderson traveled the world as Les’s featured soloist. Since then Mr. Anderson has performed for thousands and played with many all around the globe. 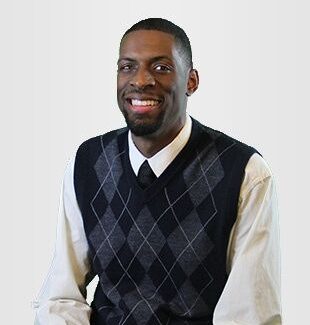 Relentless practice and the desire to achieve are the trademarks of saxophonist Quamon Fowler. A standout in high school, he studied with Tom Burchill at Weatherford College and Alvin Batiste at Southern University in Baton Rouge. It was Batiste who encouraged Quamon to produce an independent CD, a project that combined straight-ahead jazz and soul to create his own person sound. The hardworking Quamon gained attention as a young composer and touring performer, including taking home an ASCAP Foundation award twice for his compositions. He is a performer, composer, and educator who still blazes new trails on and off the stage. 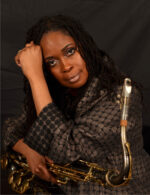 Music, being an integral part of her being, was her choice of study at the University of North Texas from which she received a degree in music. Armed with her degree, talent, and zeal, she lived an adventurous life as a freelance saxophonist. Her travels led her abroad to Europe extensively. In addition to traveling as a successful musician and working for people like the Sheila Jordan, Billy Preston and etc.also she worked as a substitute teacher for the Fort Worth Independent School District.

She treasured becoming a finalist on a BET Jazz Artists show and the friendships she made along the way. The internationally renowned jazz legend, drummer Ronald Jackson, with whom she had been collaborating off and on since she appeared on his album Shannon’s House, influenced her greatly.

Next →
Scroll to top